Below, a list of some of the titles earned by Windchaser dogs. Click on the small images to get a larger one. 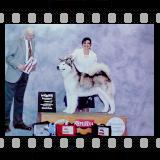 Seiko is one of those dogs that comes along once in a lifetime. Now only the sweetest and most kindest Malamute I have ever bred, but she radiates her love to all those that know and love her through her children and grandchildren. It's hard to believe she'll be 11 years old the summer of 2012. Pictured with Andrea Ste. Jhourré taking Best Veteran in Show at the X-Cel Center, St. Paul, 2011. She went on to take two more Best in Specialty Best Veteran in Shows in 2012. She then acquired the Prestigious Grand Champion Title with the AKC. 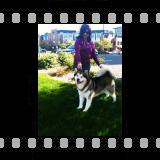 Spec. Winner Ch. Windchaser's I Did It My Way "Crooner"

Named after Frank Sinatra, Crooner definitely did it his way!!! One of the most beautiful male malamutes I have ever bred, he has not only beauty but every certification of health obtainable. He is the rare, OFA Hip Excellent, Elbows Good, Cardiac tested normal. Eyes, Certified Clear three times, DNA, and Ch.D and Blood Thyroid Profile Study - Within outstanding limits. His sire was the late Windchaser's Weapon of Mass Seduction and Dam: BPIS, BISS Ch. Windchaser's Revenge is Sweet, AKC, AOM, BBE. Eukanuba Cup Invitee for the past three years!!! 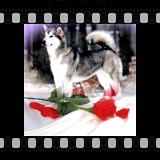 "Celeste" is pictured here at 1 year of age. She finished all her Championships under the guided handling of Anastasia Goncharova. She is owned by Vladimir, Tatiana and Anastasia Goncharova of Moscow. Congratulations to them for their championships. She was sired by Ch. Catera's Man Behind The Mask and Ch. Windchaser's Revenge is Sweet in the summer of 2009. 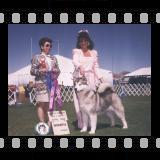 Las Vegas Specialty Winner 1996. One of the top AMCA puppies for 1996. The Son of the Famous American/Canadian/Italian/Spanish/French/German/World Best In Show Champion Ch. Storm Klouds Qquest for Glory. 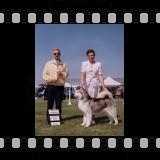 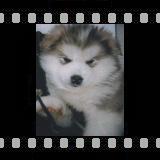 Shown here as a 2 month-old pup. 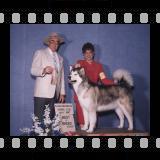 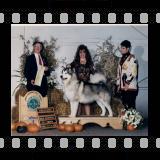 The dog pictured on the front page of our web site. Multiple Best of Breed and Group Placer. Winner of the 9-12 months sweeps at the Alaskan Malamute Club of America Specialty Show 1993. Used in Advertising for multiple major magazines and in billboard advertising. One of the top AMCA puppies 1993. 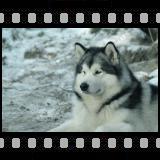 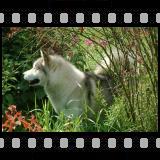 Owned and loved by many. Seven passed away on 1/4/07. He was bred by Lynda Ste. Jhourre' in the summer of 1995. He was co-owned and loved by Tony Van Leest and Rita Liebrand. He was the teddy bear of Malamutes.

See a tribute to him at www.stormchaserkennels.com

What is seen by the Eyes
And heard by the Ears
Is Nothing.....
When compared to what is felt by the heart. 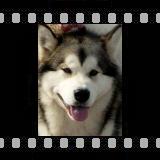 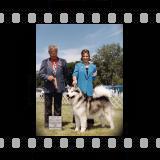 Hunter pictured with Andrea in the summer of 2001 taking another Best of Breed. Hunter left us early at 9 years of age. We miss him dearly. He was Andrea's Best Friend and a great playmate to her son, Austin. He is dearly missed by all. 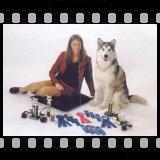 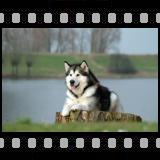 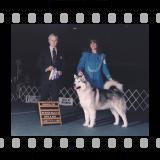 Pictured is Am/Can Ch. Windchaser's in the St. Nick of Time

Sire: Ch. BISS Ch. Sno Ridges Master Piece
Dam: Am/Can/Mex Ch. Staghorn's S-Keemo Kiss, C.D. T.T. C.G.C. T.D. ROM
"Neiko" was Snokin's last son born from her first litter, thus the name in the St. Nick of Time !! He was the teddy bear of malamutes like his future brother Ch. Windchaser's the 7th Son. Neiko died in the summer of 2006, he was 13 years old!!!!! Everyone who knew him, loved him!!!!!!! He was loved and taken care of in his later years by Trish Wolf and Mike Croyce. This picture was taken on my birthday April 8, 1995. Neiko finished his Championship on that day!! What a nice present!!!!! 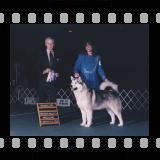 American Champion Windchaser's in the St. Nick of time WWPD

Multiple Best of Breed and Group Winner by the age of 14 months. One of the top AMCA puppies 1994. 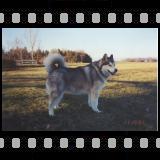 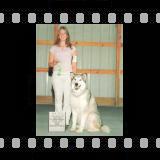 Jewel received the coveted honor of Top High in Trial Bitch at the 2001 National Specialty Show. Congratulations to Rachel Moore, her trainer!!!!!!!

Top High in Trial Bitch in Breed History in America and Canada She is the dog pictured on the Iams Dog Food Bag 2005. 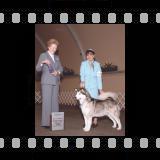 Picured is "Reeva" obtaining her Championship in the Fall of 2007. Reeva finished all in the Bred-By Exhibitor Class for her Championship and thus was given an AKC Award of Merit which is very rare!!!!!! She was invited to the AKC Eukanuba Classic competition in California for 2008 and 2009 all points systems!!!!!!! 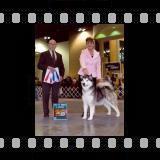 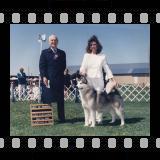 American Champion Windchaser's After the Reign 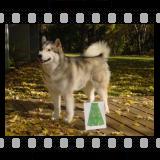 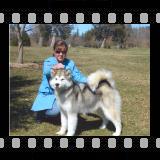 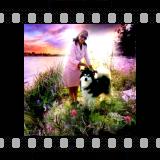 Major and Best of Breed Winner Windchaser's Ruler of the Sky - "Zeus" at age 10 months.
Bred by Lynda and Andrea Ste. Jhourre' in the summer of 2009. 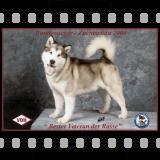 Seven winning Best Veteran in Show at the largest show in Germany October 9, 2004!!
Bred by Lynda Ste. Jhourre' in 1995. Seven is now nine years old and looking great!! The son of the Famous Best in Show - World, American/ Canadian, Mexican, French, Italian, Bundsiegger Storm Klouds Qquest for Glory and American/Canadian/Mexican Ch. Staghorn's S-Keemo Kiss, C.D. T.T., C.G.C. T.D., ROM 7 is now cowned by Rita Liebrand and Tony Van Leest - The Netherlands. Congratulations to the both of them!!!!!!!! A Great Honor!!!!! 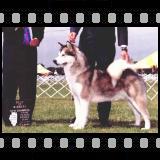 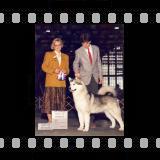 Pictured is Am/Can/Mex Ch. Staghorn's S-Keemo Kiss, C.D. T.T.C.G.C., T.D. ROM with handler Wayne Potter in January of 1992 when Sno-Kins finished her Championship in New England going Best of Winners and Best of Breed over Top Ranking Specials of the Day.

Snokins and Andrea in 1994. Snokins at her prime at five years of age taking another Best of Breed !!!!!!! 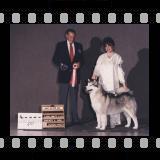 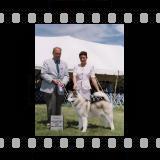 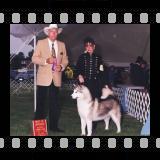 American Champion Windchaser's All About Soul